Hildegard von Bingen, The great German seer described music as a means of recapturing the original joy and beauty of paradise. Presenting a vast vision of the cosmos, her music goes to the roots of what are sound, voice and hearing. Her music often sounds like what we imagine the singing of angels to be. Her chants are rich in mystical images, and her melodies are elaborate, with florid melodic contours, ornamented inflections, and wide ranges.

Dhrupad is the oldest surviving tradition of classical music in India. It originated in the chanting of hymns and developed under the patronage of imperial courts in India over many centuries into a classical form, with its own complex grammar and aesthetics. In this style of singing the singer develops the inner resonance of the body, and can make the sound resonate and flow freely through the entire region from navel to head. This enables the singer to use a vast palette of subtle tone colours and microtonal shades. In this music the notes are not treated as fixed points, but as fluid entities with infinite microtonal shades. 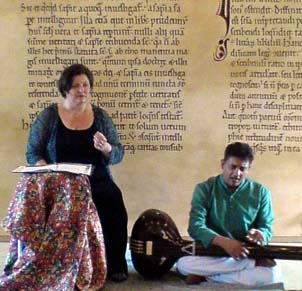 Dhrupad & Hildegard have surprisingly a lot in common both in form and spirit. Belonging roughly to the same period, the melodic phrases of Dhrupad and those of Hildegard’s compositions have a similar structure. Hildegard’s single modal melodic lines have the feel of Indian ragas. It is obvious that about 1000 years ago the sacred music of Europe and that of India had much in common though separated by a vast geographical distance.

We have presented this dialogue in Churches and other venues and the response of the audience was overwhelming.

In 1993 she was the prize winner of “The International Nico Dostal Song Contest” in Vienna and Danish winner of the “Concerti per l’Europa” Schubert song contest of RAI/ EBU television. She has performed across Europe and in USA in opera roles, in sacred music and with an extensive lied repertoire. 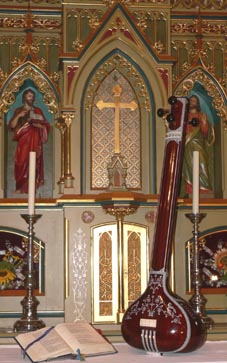 Ashish Sankrityayan is an exponent of the Dagar tradition of Dhrupad singing and has learnt from several maestros of the Dagar family. He has given performances of his art in private and public concerts in India and in Europe He has conducted workshops and given lecture demonstrations at several universities and conservatories in Europe like the Anton Bruckner Conservatory Linz, Hildesheim University and The University of Berlin and the Hochschule für Musik, Hanns Eisler, Berlin. He was recently awarded the prestigious National Culture Fellowship by the Indian National Academy of Music and Dance (Sangeet Natak Akademi).