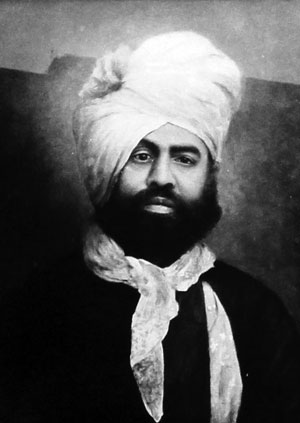 The younger son of Mohammad Jan Khan and grand nephew of Baba Behram Khan, lived in Udaipur withZakiruddin Khan, and later in1912 was appointed the principal musician in the court of Alwar. His style of singing was serene and sensual, in contrast to the forceful style of his elder brother Zakiruddin Khan. They together formed a very effective pair and were renowned for their duets. He also played the Sursringar, and like his elder brother was well versed in Sanskrit and Persian. His singing in the 1924 Lucknow All India Music Conference with his eldest son Nasiruddin Khan won high praise, and he was unanimously judged the most outstanding musician of the gathering. Allabande Khan married the younger daughter of legendary 19th century Rudra Veena player Bande Ali Khan who bore him four sons Nasiruddin Khan, Rahimuddin Khan, Imamuddin Khan and Hussainuddin Khan all of whom became Dhrupad singers of repute.

Allabande Khan used to play the sursringar. He used to write diaries some of which with a lot of information about his daily life and his music still survive. There exists a recording of Ustad Rahimuddin Dagar, illustrating the differing approaches of Zakiruddin and Allabande Khan by singing the same melodic phrase in raga Shree in their respective styles.(please see the page on Rahimuddin Dagar for an excerpt from this interview) . Judging from this demonstration of Rahimuddin Dagar, Zakiruddin Khan’s style was regal and forceful, and Allabande Khan’s soft and mellifluous. It is no surprise that they could be so effective as duet singers.