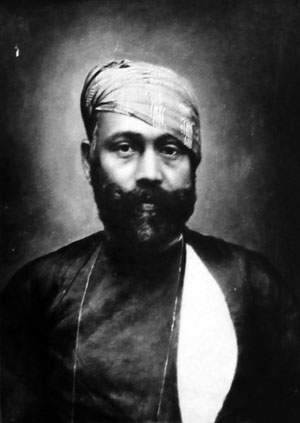 The elder son on Mohammad Jan Khan and grand nephew of Baba Behram Khan was appointed the principal musician of the Udaipur court in the 1860s by Maharana Sajjan Singh. His reputation as a singer was awesome. Blessed with a powerful voice, and a vibrant dominant personality that also came across in his singing, he would sometimes be mistaken for a maharaja of a princely state because of his regal sartorial style and bearing. In this picture he wears the typical Mewari turban of the Udaipur state. His performance of Raga Megh at the 1916 Baroda music conference apparently provoked a thunderstorm that lasted a few hours, acording to Atiya Begum Fyzee-Rahmin who was present on the occasion.

Whether or not this was caused by the singing is debatable, but the performance was powerful enough for those present to think so. He usually performed with his younger brother Allabande Khan as a duo. He was also a player of the Rudra Veena though he never performed in public on this instrument. He married the elder daughter of legendary Rudra Veena player Bande Ali Khan who bore him a son Ziauddin Khan. Zakiruddin Khan and others of his generation never used the title Dagar as a family name. The practice of using the name of the genre ( the Dagar bani or style of Dhrupad) as a family name was started by his nephew Rahimuddin Khan and later adopted by all members of the family.