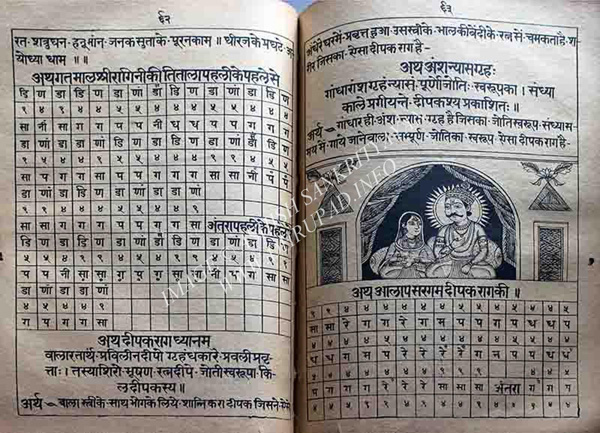 Efforts to notate and publish Dhrupad compositions started in the 19th Century when printing came to India. Dhrupad singers tried to notate and preserve compositions - the fixed repertoire of Dhrupad that encapsulated the musical knowledge and wisdom of many generations of Dhrupadiyas. Many of the manuscripts were only partly or never published. Some remained in private hands of descendants zealously guarded from the public and eventually lost or destroyed. With most of the repertoire of compositions of Dhrupad now lost or fragmented and distorted, it is a work of great importance to try to save whatever survives of books and unpublished manuscripts. Dhrupad singers who are traditionally trained and steeped in the knowledge of tradition can then use their training to reconstruct repair and restore compositions that have been distorted or lost and bring them back to life. I have over the last 30 years tried to collect and digitize published and unpublished works with my own resources and hope that a well funded initiative can be launched to carry out this task on a war footing. Below is a partial list of books I managed to digitize.

Search and digitization of rare works requires funds and donations supporting the work are welcome. Raw digital images of pages of copyright expired works available at 0.50 euro cents per page minimum 200 pages. (No Discounts possible). Proceeds will be used to finance the search for and digitization of more rare works on Dhrupad.

Sangeet Samuccaya 1924 complied and edited by Shivendranath Basu A compilation of notations of compositions of mainly Dhrupad in various Ragas. The first volume has 72 compositions. The author writes that he has collected over a 1000 compositions and also instrumental Gats and pakhawaj compositions which he hopes to publish in the future. The back cover of the first volume mentions that the second volume is being printed. However it was probably never printed.

Sangeet Kaladhar 1901 by Dahyalal Shivram state musician of Bhavnagar. Has notations of many compositions of Dhrupad in the Gujarati script.

Raga Kalpadrum 1916 (3 volumes) - the magnum opus of Krishnanand Vyas with a near exhaustive listing of the texts of Dhrupad and Khyal compositions. Invaluable for the work of removing distortions in compositions and also in reconstructing lost parts of compositions.

Geet Vadya Sar Sangraha 1905- by Charucharan Mukhopadhyaya A collection of 250 compositions of Dhrupad in notation. The author writes about a soon to be published 2nd volume which again like in most cases never got printed.

Sangeet Chandrika by Gopeshwar Banerjee, written in the early years of the 20th century by the renowned Dhrupad singer of Vishnupur Gopeshwar Bannerjee. Contains many Dhrupad compositions in the danda matrik system of notation that is superior to what is commonly found in India, because it makes provision for half and quarter notes. In the later editions the danda matrik notation has been changed to the Bhatkhande system. The compositions sound authentic, and are free from distortions that are common in most published works. This is probably because the author was himself a highly respected Dhrupad singer.

Sangeet Manjari 1909, 1935 by Ramprasanna Banerjee the elder brother of Gopeshwar Bannerjee. Like the Sangeet Chandrika has many beautiful compositions. Again free from distortions since the author was a highly respected Dhrupad singer. The book is in the more accurate danda matrik notation.

Nad Vinod Granth 1896 by Pannalal Goswami published in Delhi in Hindi and Urdu has many Sitar Gats and the texts of some Dhrupad compositions.

Raga Prakash by Madhosingh Date of publication unknown. Has only the texts of many Dhrupad compositions. Sample_pdf

Sangeet Sudha Sagar early 1950s by Prankrishna Chattopadhyaya has notations of Dhrupad compositions in rare ragas. The author was a disciple of Abban Khan of Saharanpur of the Dagar tradition and Nihal Sen Seni of Jaipur. The book is a part of vol 1 of a much larger work which probably never got publishe.

Gita Sutra Sar 2nd edition 1939 by Krishnadhan Banerjee in two volumes It is mentioned in the preface of Sangeet Manjari of Ramprasanna Bannerjee as the only book of its kind available till the publication of the Manjari. Vol. 2 has Dhrupad compositions in western staff notation.

Sarod Rasa Chandrika 1945 by Nirendrakrishna Mitra - Has instrumental compositions (gats) in 312 ragas attributed to Ustad Amir Khan the teacher of the author. The interesting thing is that the gats are classified into the four dhrupad banis - gauhar, dagar, khandar and nauhar..

Sangit Prakashika and other monthly journals from late 19th and early 20th century with notations of Dhrupad compositions contributed by well known dhrupad singers of the time like Radhikaprasad Goswami and others.

Marifunnagamat by Nawab Ali Khan in three volumes. The second and third volumes have many fine Dhrupad compositions of the Senis (decendants of Tansen). Some of the compositions were contributed by Ustad Abban Khan of Saharanpur who belonged to the Dagar family ( he was a disciple of Baba Behram Khan and maternal grandfather of Ustad Fahimuddin Dagar) and by Kale Nazir Khan a disciple of Allabande Khan.

Rag Vigyan by Vinayakrao Patwardhan - Has compositions mainly of khyal but also a significant number of Dhrupads.

Sangeetanjali by Omkarnath Thakur - Has compositions mainly of khyal but also a significant number of Dhrupads.

Dhrupad Dhamar by Balasaheb Poochwale - Has Dhrupad compositions from the tradition of Vamanbua Deshpande of Gwalior.

Dhruvapada by Indurama Shrivastava - A very scholarly and well referenced book - the PhD thesis of the author. Contains references to some rare recordings of Dhrupad in the Sangeet Natak Academy archives of Dhrupad singers like Bharatji Vyas and T.L. Rana.

Dhrupad: Tradition and Performance in Indian Music by Ritwik Sanyal, Richard Widdess - A very well researched scholarly work using the methods of Western ethnomusicology with scientific graphs and measurements, presenting essentially the viewpoint of Ustad Zia Mohiuddin and Ustad Zia Fariduddin Dagar which says that there are 10 characteristics of Dhrupad singing and 10 characteristics of instrumental Dhrupad and attempting to understand these characteristics through a scientific analysis of a recorded example of a performance.