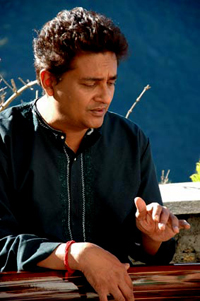 Ashish Sankrityayan is an exponent of the Dagar Tradition of Dhrupad. He has trained for twenty years under three maestros of the Dagar family and is well known for his frequent concert appearances and teaching. Ashish Started his musical training at an early age, first learning the sitar and subsequently vocal music. While studying mathematics at the University of Bombay he was inspired to take up Dhrupad when he heard a recording of the senior Dagar brothers Nasir Moinuddin and Nasir Aminuddin Dagar, and met Rudra Veena maestro Ustad Zia Mohiuddin Dagar.

He later trained under several maestros of the Dagar family Ustad Rahim Fahimuddin Dagar, Ustad Zia Fariduddin Dagar and Ustad Hussain Sayeedudddin Dagar for twenty years and was awarded the National Junior Culture Fellowship by the Indian National Academy of Music, Dance and Drama ( the Sangeet Natak Akademi). Ashish has given numerous public performances of Dhrupad and has given lectures and workshops in institutions like the Anton Bruckner University in Linz, The Free University of Berlin, Hochschule für Musik Hanns Eisler Berlin, Hildesheim University, University of Copenhagen. He often performs with European medieval, renaissance and contemporary musicians.